The long awaited Sports Day finally dawned on the 13th of December, 2019 at Notre Dame School, Tarkhad.
It began with the Junior Sports Meet. The chief guest for the event was Mr Suryaprakash Mundapat an international karate and kickboxing referee.
After seeking the blessings of the Almighty, the chief guest was escorted by the manager Sr Mary Jayanti, the Principal Sr Mary Shylaja, the President of the PTA and the school leaders.
The school flag was hoisted by the chief guest which was followed by the March Past of the four squads. Leading the parade were the head boy and head girl with their assistants, closely followed by the sports captain and the assistant. Each house was led by their captain and vice-captain with their respective flags bearing a symbol and a message. The oath was taken by the assistant sports captain Saloni Gharat. After the flag planting ceremony the torch was lit by the chief guest who handed it over to the sports captain Parth Patil
who handed it over Vidisha Wagh Chess champion who handed it over to Nethan Patil  Skating champion and finally it was placed on the torch stand by Saloni Gharat the vice sports captain. The chief guest then declared the Junior Sports Meet open and the dove and balloons were released.
The flow of events followed suit. There were flat races for students from the pre-primary to grade four. There were beautiful drill displays by grade one to four students. Unique props like umbrellas, hooplas, balls and smileys were used. Each display conveyed the message of JPIC which was the theme of the Sports Day. The novelty races brought a lot of laughter and cheers. The little ones had fun in balancing the ball, the rubber band bottle run, making a bouquet, the straw and bud race and rolling the ball forward with a cricket bat.
The primary school children had innovative games like walking in a shoe box , wheel barrow, dragging the ball with the hoopla, hurdles, fixing the  hooplas, skipping and kicking the ball to the finish.
There was a game for parents too. The young dads enjoyed the tug of war and the excited mums danced around the field in bombing the city.
The finale was the Mass drill. The chief guest then addressed the children after which Elvira D'souza a grade 4 students proposed the vote of thanks. The Sports day was brought to a close with the singing of the school song.

It was indeed a fun filled day for everyone. The management, staff and non-teaching staff along with the grade 4 workers had joined hands to make this day a success!! 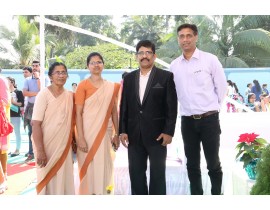 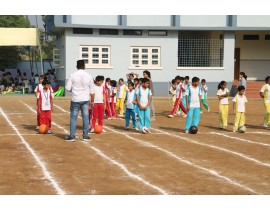 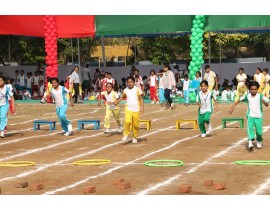 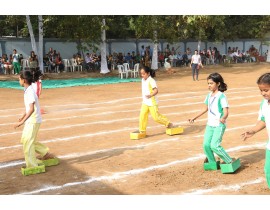 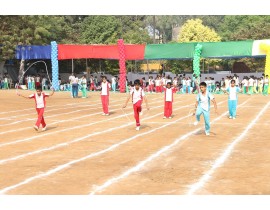 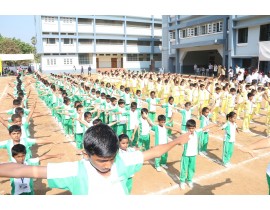 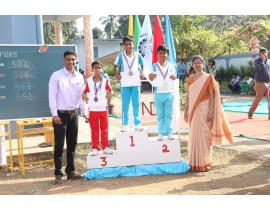 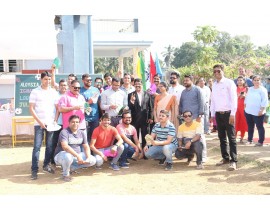 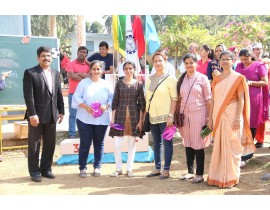 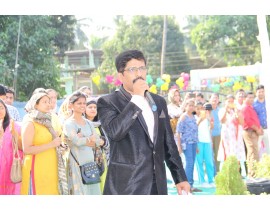